A Bargain in Silver by Josie Jaffrey


A Bargain In Silver by Josie Jaffrey is a post apocalyptic paranormal romance and the first book in the Solis Invicti series. Emmy’s life is brought crushing down on the night the Weepers descend on the human race and almost consume the entire world. If not for the vampire race who call themselves the silver humanity would have been wiped out completely. Even though she owes the silver leaders her life Emmy is unwilling to surrender her freedom. Torn between two distinctly different silvers her new found attachments may fracture the fragile peace between man and silver. Can there truly be peace when one race considers themselves superior and the others little more than slaves.

Josie Jaffrey has created a realistic picture of post apocalyptic London that is chilling and yet full of hope. I loved Emmy who is everything a survivor should be. She fought for her freedom and used her mind to compromise when she knew she wouldn’t win otherwise. This story is not just romance but also focuses on the lives of other people who’ve lost loved ones and how far people are willing to go to survive. It has the kind of characters that made The Walking Dead such a hit tv series. And the love triangle developing between Emmy and her two silver alpha males is just so exciting. I love the anti-hero type heroes in this book a lot. Will she end up with Sol or his love struck Secundus? Not to mention the danger Emmy faces from the enemies she has made.

If the price of safety is slavery, would you bargain your life?

A Bargain in Silver is book one of Josie Jaffrey's Solis Invicti paranormal romance series, set in a dystopian, post-apocalyptic London.

A deadly infection threatens to wipe out humanity. The only people who can stem its advance are the Silver, a vampiric race who offer a simple exchange: protection in return for blood and subservience. It's not a deal that Emmy's willing to make, but as her world burns around her she finds herself in the arms of the enemy and the line between oppressor and saviour begins to blur.

After an attack by the infected, Emmy is rescued by the handsome Drew who introduces her to the world of the Silver. Desperate to escape subjugation and confused by her attraction to him, she gathers what remains of her surrogate family and plans to make a break for freedom.

But despite her efforts to resist, she is drawn further into the intrigues of the mysterious Silver through the agency of their ruler, the Primus: Solomon. Emmy refuses to submit to the cold and detached Primus and an attempt on her life makes it clear that he is unable to protect her from the political machinations of his race.

As the connection between them deepens she must choose between her desire and her will to rebel, but can she trust his intentions when everyone is after her blood?

2.The Price Of Silver

The Price of Silver by Josie Jaffrey is a post apocalyptic paranormal romance and the second book in the Solis Invicti series. London is walled off surrounded by millions of Weepers waiting to devour the humans under silver protection. Emmy is caught in the middle between her loyalty to humans and the friends she’s made in the Silvers. The silver in Drew’s eyes means they are connected in life and death yet she finds herself drawn to Sol the London Primus who couldn’t care less if she lived or died. Her choice seems clear but there is more at stake than she initially thought. Drew’s life is literary tied to her own. As she juggles Silver politics Emmy must also deal with the human rebels whose ideals she’s not completely opposed to.

The Price of Silver starts off directly after the events of A Bargain In Silver. Josie Jaffrey takes us deeper into the Silver hieracy and how their society works. The dynamic between the Silver and the humans is also expanded on and the reader will find themselves understanding the motives of both races. I liked the supervillain in this story because he is so unique. They know who he is, know where he is but he is untouchable. It was one of the most inventive plot twists I’ve ever read. As for Emmy’s love triangle I think I’m on the Sol team even though I felt sorry for Drew. I can’t wait to get my hands on the third book to see how everything turns out. 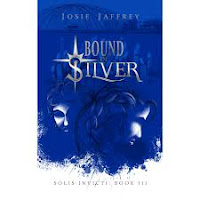 Bound In Silver by Josie Jaffrey is a post apocalyptic paranormal romance and the third book in the Solis Invicti series. Are there worse things than being under the protection of the Silver. Emmy is finally outside the wall of London but it’s not quite what she expected. The Weepers have always retreated from the Silver race but what if they are learning resilience the same way they’ve learnt to walk in the sun. Emmy and former rebel have been taken to the farm where they will serve their sentence for rebellion at the Primus’ leaisure. The farm is far from Ben’s clutches but it has it’s own set of dangers. As Emmy struggles to survive far from her friends she comes a little too close to the Weepers than she’d like.

Josie Jaffrey raised the tension in Bound In Silver but it was my least favorite book so far. I wanted more Sol and Drew from the beginning. Alas it was not to be but the author did a good job of getting my mind off London. If I thought Ben was crazy book three introduces a scarily deranged adversary for Emmy. I didn’t see how Emmy could survive but Josie Jaffrey came through for me.  This book also brings in a new facet of human nature that I didn’t approve but understood. That is the relationship between Emmy and her fellow prisoner. The plot is as complicated as ever and I think the reader gets to really understand Emmy’s character and motivations in this one. There was also the most staggering reveal of the series. I had a serious OMG moment in this one.

The Silver Bullet by Josie Jaffrey is a post apocalyptic paranormal romance and the fourth book in the Solis Invicti series. Emmy’s story has finally come to a head. With the choice to remain human and be a weakness to the silver she loves or turn silver and becoming an enemy to the race she seeks to protect. Ben and his forces have taken over London and put the remaining humans under an iron fist. Those Silver loyal to Sol are either already dead or being hunted down. The characters in this book are tested beyond anything the’ve faced before. Old friends anre lost while new bonds are created out of necessity.
The Silver Bullet is an amazing ending to Emmy’s story. It was action-packed, emotional and tension-filled in a league of its own from the previous books. Emmy finally knows her heart and she’s grown-up in a matter of weeks since the Silver came into her life. I loved the hero in this series because he was more understanding than most. It’s very rare to get such a male in a hero dominated by macho alpha types. Emmy really earned her HEA through the twists and turns in this one. I hope to read more about these characters as they rebuild their world and mend broken fences. I love these books that explore the possibities in a world-ending catastrophe. Anyone who loves zombie apocalypse drama will love this series.

Posted by Grace Ashley at 02:23 No comments: